The Oosterscheldekering (in English: Eastern Scheldt storm surge barrier), between the islands Schouwen-Duiveland and Noord-Beveland, is the largest of the 13 ambitious Delta works series of dams, designed to protect the Netherlands from flooding. The construction of the Delta Works was in response to the North Sea Flood of 1953.

The nine kilometre-long Oosterscheldekering (kering meaning barrier) was initially designed, and partly built, as a closed dam, but after public protest huge sluice-gate-type doors were installed in the remaining four kilometres. These doors are normally open, but can be closed under adverse weather conditions. In this way the saltwater marine life behind the dam is preserved and fishing can continue, while the land behind the dam is safe from the water. On 4 October 1986 Queen Beatrix officially opened the dam for use by saying the well-known words: De stormvloedkering is gesloten. De Deltawerken zijn voltooid. Zeeland is veilig. (The flood barrier is closed. The Delta Works are completed. Zealand is safe.)

At the artificial island Neeltje-Jans, at one end of the barrier, a plaque is installed with the words: "Hier gaan over het tij, de wind, de maan en wij" ("Here the tide is ruled, by the wind, the moon and us (the Dutch)").

The Oosterscheldekering was the biggest, most difficult to build and most expensive part of the Delta works. Work on the dam itself, which was undertaken by a consortium of contractors comprising Ballast Nedam, Boskalis Westminster, Baggermaatschappij Breejenhout, Hollandse Aanneming Maatschappij, Hollandse Beton Maatschappij, Van Oord-Utrecht, Stevin Baggeren, Stevin Beton en Waterbouw, Adriaan Volker Baggermaatschappij, Adriaan Volker Beton en Waterbouw and Aannemerscombinatie Zinkwerken,[1] started in April 1976 and was completed in June 1986, though the road over the dam was ready for use only in November 1987. The road was opened by the former queen, Princess Juliana on 5 November 1987, exactly 457 years after the St Felix Day's flood of 1530 had washed away a large chunk of Zeeland, upstream of the new barrier's position.

To facilitate the building, an artificial island Neeltje-Jans was created in the middle of the estuary. When the construction was finished, the island was rebuilt to be used as education centre for visitors and as a base for maintenance works.

The dam is based on 65 concrete pillars with 62 steel doors, each 42 metres wide. The parts were constructed in a dry dock. The area was then flooded and a small fleet of special construction ships lifted the pillars and placed them in their final positions. Each pillar is between 35 and 38.75 metres high and weighs 18000 tonnes.

The Oosterscheldekering is sometimes referred to as the eighth Wonder of the World, and has been declared one of the modern Seven Wonders of the World by the American Society of Civil Engineers.

The dam was designed to last more than 200 years.

Four ships were custom designed and built for this project:

The ships are named after various types of shellfish.

The dam is manually operated but if human control fails an electronic security system acts as a backup. A Dutch law regulates the conditions under which the dam is allowed to close. The water levels must be at least three metres above regular sea level before the doors can be completely shut. Each sluice gate is closed once a month for testing. Also emergency procedures are tested on pre-scheduled dates. Once the test is passed, the shutters are immediately opened again to create a minimum amount of impact on tidal movements and the local marine ecosystem. It takes approximately one hour to close a door.

The full dam has been closed twenty four times since 1986, due to water levels exceeding or being predicted to exceed the three metres. The last time was on 8 November 2007.

The cost of operation is €17 million per year. 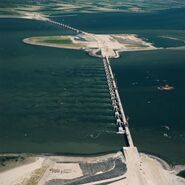